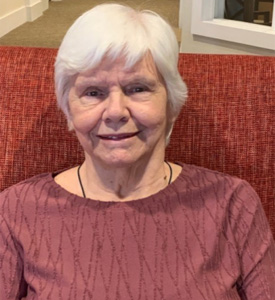 Jessie was born on a farm in Texarkana, one of ten children—five girls and five boys. She was one of the middle children, which kept her very busy. Jessie was married right after graduating from high school. She had two children, Danny and Eddie. Five years after divorcing her husband, she met Robert Henry, who also had two children, Teresa and Debra. After they were married, they added another child to the family when their daughter Connie was born, completing their family of five children. Robert owned Robert Henry TV and Repair Service in Texarkana, and Jessie worked in his shop keeping the books. She was an avid seamstress when the girls were young. Her favorite thing to do was to go camping in an RV by the Cossatot River. Jessie was the best fisherman in the family. Robert passed after forty-five years of marriage and left her in the grateful hands of her family, her twelve grandchildren, thirteen great-grandchildren, and one great-great-grandchild.