9 months ago · navdeep · Comments Off on Resident Spotlight: Billie Langston 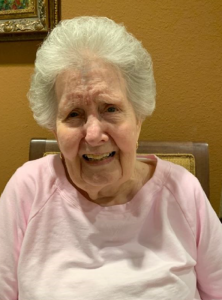 This month we are shining the spotlight on Billie Langston. Billie is a Texas native born in Golan Community in Jones County near Merkel, Texas. At the age of 16, Billie graduated from Noodle High School. From there, she attended McMurry College in Abilene, TX. During college, she was employed as a part-time secretary at the First Methodist Church, where she met her husband and the love of her life, Derwood. Billie and Derwood were married during her junior year of college, and in 1949 they relocated to McCarney, TX, where Derwood became an officer at Security State Bank.

They built a beautiful life and family together in McCarney, where they had three children and faithfully served in the Methodist Church. Billie served the United Methodist women and the choir, and Derwood always volunteered his time in any way needed. While in McCarney, one of Billie’s fondest memories is her participation in the Mrs. America contest in Dallas in 1959.

When their children were out of the nest, it was time for Billie and Derwood to move on. In 1976, they returned to Abilene, TX, where Derwood served as President and CEO of a new bank he chartered. They became involved in Aldersgate Methodist Church, where they served as greeters for 35 years.

Sadly, Derwood passed away in 2001, but Billie continued her involvement at the church until 2017, when she moved to Prosper to live with her daughter.

Billie is a very creative person, a gourmet cook, a poet, and a writer. She came to Tribute in May of 2020, where she spends a lot of time reading biographies and catching up with her children and grandchildren.

Billie has undoubtedly lived a blessed and fulfilling life. Her compassionate and cheery demeanor is welcomed at Tribute, and she enjoys spending her time here with our other residents.